'Tis the season for taking shots at just how the holiday season will turn out.  Some interesting news items and a look at a few guesses about the season:

*  The number of jewelry retailers in the United States continues to decline, by 2.5% last year, according to JBT.  There are now around 22,000 jewelry stores in the US.  (The number of manufacturers and wholesalers has also declined by a few percent.)  At one time a couple of decades ago there were more than 30,000, and further back, 40,000.  Back then, the US population was much smaller, so by rights we should have seen growth - if the business model was viable.  A part of that decline can be attributed to the nature of the business.  Family run, they present very little "cash out" options other than liquidation when owners seek to retire and there is no younger generation stepping in.  Would you pay millions to buy a single store retail business?  And work long hours and long weeks?  So the wheat has gone out with the chaff.  Many stores may have failed, as in the latest severe recession, but many strong operations disappeared simply for lack of continuity.  We now have strong survivors that are increasingly dominating local markets.  That pretty much assures that we will see further declines in the number of stores.  Fewer, stronger stores, pursued by many suppliers.

*  ShopNBC is reducing airtime for jewelry, shifting to lower-priced categories.  Right before the Christmas season?  Jewelry has been a leading category on TV shopping stations for as long as they have been around.  Is jewelry really getting that weak?

*  Signet Jewelers Ltd. bought Ultra Stores Inc., operator of the Ultra Diamonds for $57 million in cash.  Again, right before the Christmas season?  In years past, a chain that sought a merger or buyout would at least make the most of the Christmas season with big discounts and promotions.  I am strictly speculating, but was Ultra so strapped that it could not stock for the season?  The price paid (well below $1m per store) suggests that.  Ultra, according to Signet, is a very strong outlet mall operator, which is an important business model.  Apparently the Ultra name does not mean much.  All stores will become Kay stores by around mid-2013.  Over the last 30 years or so, some 50 mall-type chains have either closed, merged or been bought out.  How many new ones have arisen?  None.

Then we get some prognostications on the coming season.

*  According to the 2012 Survey of Affluence and Wealth in America, produced by American Express Publishing and Harrison Group, only the most affluent will increase their buying this year.  The survey polled 625 affluent U.S. households and found that gift giving among the wealthy will decrease 3.4%.  However, the top 10% will increase their gift spend 21.9%.  The other 90% percent intend to spend 10.9% less.  Overall, 26% of respondents plan to purchase jewelry or watches.  If I read this right, in the opinion of Amex and Harrison think 2.5% of the top 10% of earners will buy jewelry this year.  Everyone below the top 10% will spend less.  So, not that good.

*  On the other hand, National Jeweler, reported that Bain & Company said it expects worldwide luxury revenues to increase 7% in the 4th quarter of 2012.  Jewelry is projected to increase 13% and watches 14%, with both categories to show the strongest gains in 2012.  Only hotels, at 18 percent, leather goods, at 16 percent, and shoes, at 13 percent, are expected to perform as well or better this year.  Well, great!  So this sounds much better.

No need to go further.  The guesses are all over the map.  But that does not deter me from taking a shot.  No survey, no phone calls to affluent households, just a simple look at some charts.  I do that because our economy is so complex that pat predictions are not really of any help.

Jeff Miller, on Seeking Alpha, showed some worthwhile information.  The credible Conference Board tracks economic changes.  Here it shows the effects of eight recessions.  The last one created the deepest decline, but we have been making steady, though slow, improvement for over three years.  We can safely assume that jewelry will trail other categories as the public deleverages and spends on necessities before getting to discretionary purchases.

Below we see that retail sales (shown as a % change over the previous year) have made substantial gains since the depth of the recession.  The growth has flattened a bit after the solid advances of last year.  So the public is not loading up credit cards.  In a way, that is good.  At least sales continue a few percent above last year. 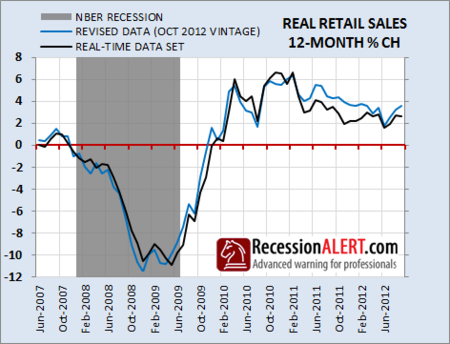 Even more encouraging, the key economic indicators have all steadily advanced for 40 months.

More to the point in our industry, the IDEX index of diamond prices shows a significant drop.  Without addressing the reasons for what drove prices up in the first place, we can at least say that current prices will (hopefully) be reflected at retail stores, lifting sales.

All of this tells us the retail sales will be a few percent over last year, and I am not an economist by any stretch.  What we do not know is the share that jewelry will get.  Bridal will do well, but for an individual retailer there are questions even there.  So many more suppliers and retailers have enlarged or entered that category, so pie slices may be smaller.  Will consumers continue to buy silver, or will they step down further and but costume jewelry for even lower prices.  That is a subject for another day.

But we can expect a decent Christmas. We wish a quick recovery for those battered by Sandy, and wish everyone a most Happy Thanksgiving.

Posted by Janos Consultants at 10:45 PM No comments: