August, which now recedes quickly into the past, was a good month to slow down, step back, and take some time off.  (I hope you all missed my rambling!)  After all, the business side took a distinct downturn, so why not seek some relief.  In our case, we went off to a country that is seeing enough grief of its own - Spain - but it did not seem that Spaniards were awfully upset.  Maybe we can learn something there .....

We spent a few days in Barcelona, then drove up the coast to Aiguablava, a small town on the Costa Brava.  Then went on for a day visiting the old city of Girona before coming home.  We took nearly 800 photos and here is a small sampling, with a few comments as we go along.  I hope you like the impromptu tour!

The tour stops at Miro's museum, but I have much more (The Park Guell, the clifftops of the Costa Brava, the 1,000 year old Jewish sector of Girona).  If you want to see more, just comment on this blog, and I will be happy to do it!  (Meanwhile, I will go back to commenting on the our industry....)

Barcelona, even in August's heat, is a wonderful place to visit.  The city is bounded by hills to the north and the Mediterranean to the south.  The waterfront is partly port and partly beaches, and the two work well together.  The city greatly improved the waterfront for the 1992 Olympics, as were the broad avenues that traverse the city.

Barcelona is a wonderfully photogenic city.  The old and new mix everywhere.  The main tourist strip - La Rambla - is not a place to spend any time, except for the marvelous market, where locals shop for meats, cheese and fruits.  One is overwhelmed with sensory stimulation, and the desire to taste too much!


But La Rambla leads us down to El Gotic, the old section of downtown dominated by the cathedral, where we see ancient walls and the narrow alleys that preceded the advent the car by centuries.

Nothing is more central to life in Barcelona than food - and it is exceptional.  We waited over an hour to get into Tapas24 (no reservations!) at about 9:30 PM.  The best tapas we have ever had, by far.  The place itself, in a basement, can best be compared to an overcrowded school lunchroom.  But you have never seen so many happy people. 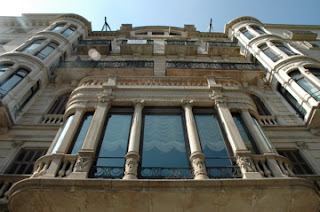 The city's architecture often stops us in our tracks.  The city has very few tall buildings, and many broad avenues, giving the city full access to the Mediterranean sun.  The Spanish touch is classic, with beautiful details.  Very gracious. 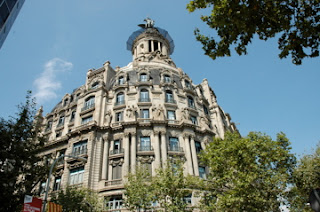 How grand, how grand. 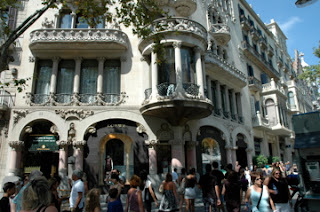 This building, on Passeig Gracia, stopped everyone.  Eye candy! 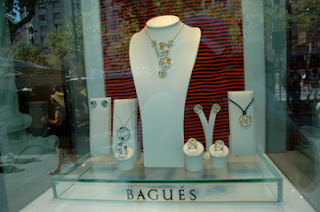 Some beautiful jewelry to be seen - I am still on a busman's holiday. 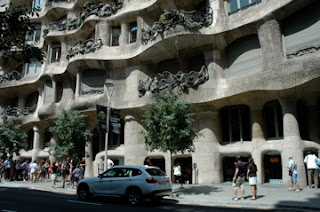 Just down the avenue is Antonin Gaudi's famous La Pedrera.  The creativity shown here in a building finished in 1912, is unlike anything I can recall.  It is timeless, and stands out totally by itself as a stroke of genius.  It was our first exposure to Gaudi's work, and we breathlessly gaped at his creativity. 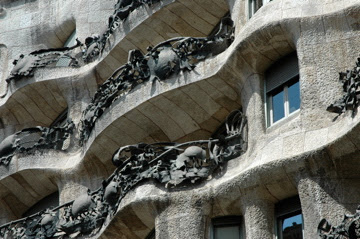 Here is a close up of the wrought iron railing of the balconies.  Gaudi's designs are organic, and filled with nature's fruits - executed in flowing lines of iron. 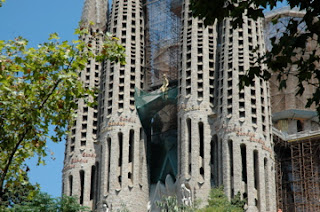 These are shots of Gaudi's Sagrada Familia, a cathedral begun well over 100 years ago (started in 1882, and still not complete!) is a breathtaking structure; immense, stunning in design and truly inspiring.

There is no way that photos can convey the beauty and magic of this World Heritage structure.

This site alone warrants a visit to Barcelona. 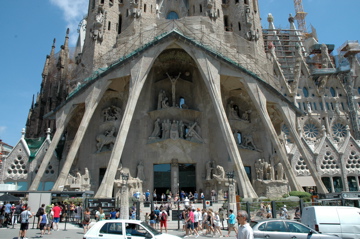 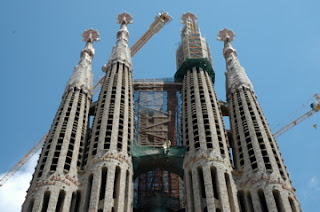 I have no way of knowing, but the tops of the spires are probably 40 stories up.  We did not go inside (2 hour wait when we were there), but do go to Wikipedia and see more shots and details of how construction is now being accelerated using computers to precut all stone.  Before, it was all done by hand.  Time to completion has now been cut from 100 years to about 15. 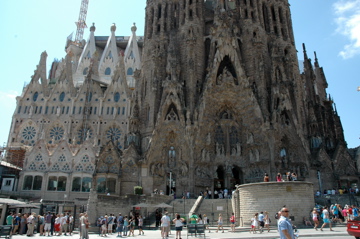 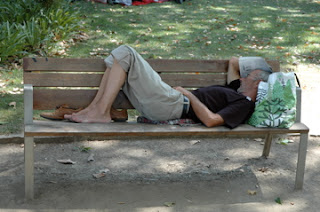 AH, siesta time.  We saw this everywhere.  People still sleep from 2PM to 4PM.  Got to rest up for those 10PM dinners! 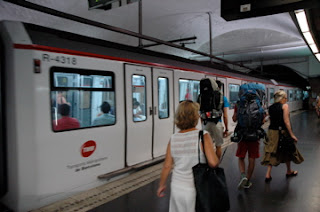 Subways are great, easy to use, and quickly take you to any part of the city. 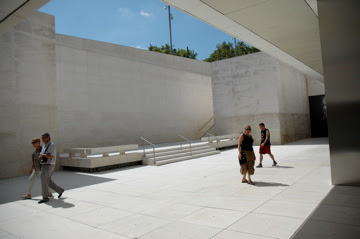 The small, very well done, museum Caixa Forum, near the Palau Nacional.  Housed in this museum was an exhibition on the history of skyscrapers, starting with a conception of the Tower of Babel, through all the great building of the US, Asia, and Dubai.

The building is a blend of very clean modern space, wrapped around a winery built for the 1929 Exhibition that included all this area. 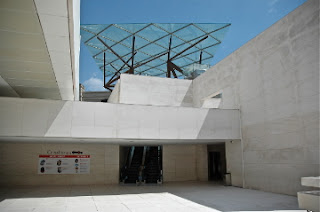 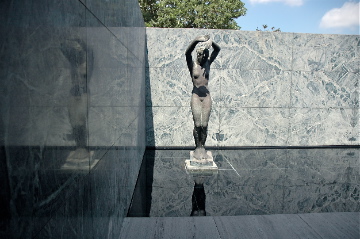 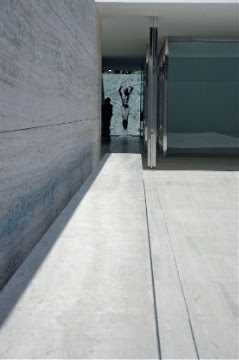 Across the street is a re-built, simple pavilion that was Mies Van der Rohe's contribution to the 1929 Exhibition.

That such a building was created in 1929 is a tribute to Mies's vision.  He set the path towards so much of contemporary architecture.  It was Germany's contribution to the Exhibition, and afterwards they could not sell it to anyone, so it was taken down and scrapped!  Some years ago the decision was made to rebuild it, and it was replicated to the smallest detail and identical materials.  Except that I found a mistake!  The window frames were secured with Phillips head screws - which were not invented in 1929!  The attendant was duly impressed, and said yes, that was the one mistake made.  The statute was taken back to Germany in 1929, and during the war was lowered into the Rhine to protect it.  It was found for the reconstruction, and an exact replica was made. 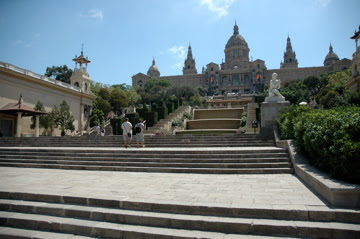 This is a view of the Palau Nacional.  This huge structure, the dominant element in the 1929 Exhibition, atop the Montjuic ("Mount of the Jews", because here is where the ancient Jewish cemetery is located) is accessed via countless staircases and outdoor escalators.

And below is the view from the top.  Quite a spot. 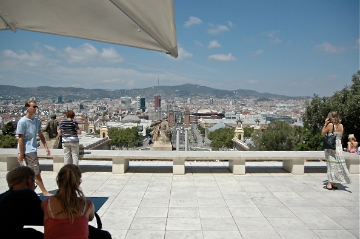 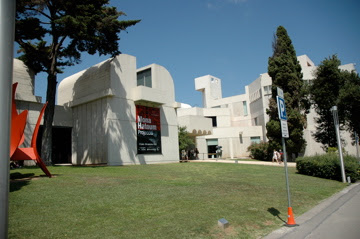 Just further up the mountain from the Palau, is the Miro museum.

An island of style and great art. 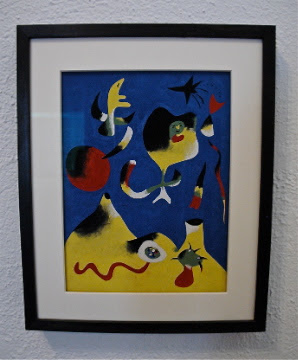 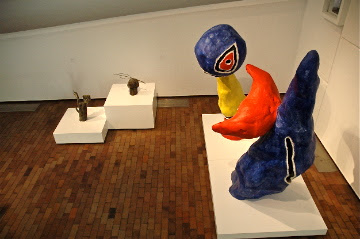 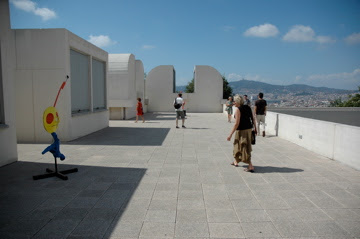 The rooftop of the museum, high above the city, is a quiet zone.  The sight lines. the well-placed, bright art works; the brilliant light, make this a very special place.  We loved it. 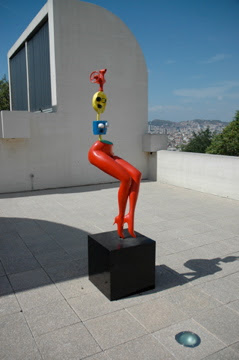 Want to see more?  The Park Guell, where Disney must have picked up ideas; the clifftop views on the Costa Brava; the ancient stone walled streets of Girona?  Let me know ......