The Hong Kong Show had more energy than any show we visited this year.  The crowds were big, though mostly Asian.  The show is bigger than ever, now probably the biggest in the world, and it has expanded to occupy odd spaces and ballrooms.  The early impression was that the show was a hit.


Then again, maybe it wasn't for many vendors.

Traffic in many aisles was heavy, but many vendors were not happy - "lookers, not buyers."  I had no problem stopping almost anywhere for a chat or to work, with few other buyers coming in to the booths.  Among the hundreds of loose diamond vendors and stone dealers, for example, the business seemed more about selling each other than to retailers or manufacturers.

Yes, there were some good stories.  One Hong Kong jewelry manufacturer related that business in the very high end was reasonable, but business in middle-priced 18 karat and diamond jewelry was "totally dead."  He also wrote huge orders on a ring and pendant set (18 karat and miniscule single cut diamonds set in featherweight mountings), priced at $150.  He booked 80,000 sets or $12 million in business.  Where are they going?  Mostly to Russia.  It will keep him busy for three months.  But these imbalances make him very nervous.

On the top floor of the convention center, in a beautiful space, are the top tier exhibitors, selling to the super-rich for whom the price of gold or diamonds are not a barrier to buying.  I heard of million dollar plus sales orders.  But even here, most of the vendors I spoke to said traffic was there, but buying was slow.

Seeing the variety and quantity if diamonds here and in the hall filled with diamond companies, one wonders just how much of a shortage there really exists in larger stones.  Small goods are another issue.  That's a subject for another post.

And, tucked away in corners were specialists.  I saw one small booth filled with carved mammoth ivory.  The Chinese vendor swears they are all carved from this pre-historic ivory!  Is there such a supply?  Talk about a niche product.  The carvings were very well executed, ranging from small objects, to dragons.

The work is all done in some small Chinese village where everyone, apparently, is involved in the trade.  The vendor, seeing i was from New York, made a point that among her customers are several Park Avenue residents in New York. 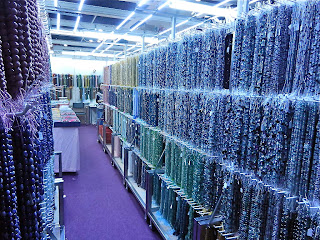 The main floors were tough to work.  The Show divided vendors up by country, but sometimes not.  The condensed show guide listed exhibitors by country, not alphabetically!  What a pain that was.  Where the floor placement was based on category, the show displayed critical mass on a scale we do not see at other shows, except perhaps for watches in Basel.

Visiting the halls for pearls and beads was overwhelming.  There were huge piles of pearls in sacks and piled on tables; strands of beads in such quantities as to beg the question - how does a buyer deal with this? 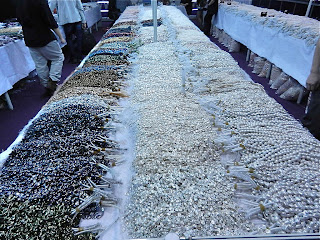 One upscale pearl dealer, out on one of the main floors, deplored this display.  He said that the massive overproduction of fresh water pearls and South Sea pearls is destroying the business, or at least killing the ability of most suppliers to make a profit.  He was particularly upset over the destruction in the value of South Sea pearls.

The deluge of pearls has parallels in other categories of jewelry.  The jewelry floors are dominated by Chinese companies that have, for example, taken similar routes to product development of diamond jewelry.  Take tons of small goods, mount them up in tons of rings, and lay them out in indistinguishable, jammed, trays.  Their interest is focused on adding value to diamonds and using a range of qualities.  In some cases, the mix of color, clarity and make was laughable.  (Why spend time and effort assorting half-pointers?)  The styling is abysmal, repetitive and old, old, old.  Any sale of any amount is fine for these vendors, so long as it is immediate cash.  I walked the aisles (all of them!) seeking companies that had some idea of design, marketing, quality and merchandising collections.  They were there, but few and far between.

I saw the same approaches taken by vendors at other shows this year.  A near desperate adherence to historic gold and diamond design, in a vain hope that the old days will return; a literal translation of traditional designs to silver and base metals, which fails terribly most of the time; and a general reluctance to expend effort and money on new collections and concepts.  The fact we all face is that the mid-range market is still there, significantly reduced in size, probably for years to come, and there is not room for everyone.  The pie is smaller, so the slices need to get bigger.

So, on one hand, an endless number of Shambala-like and Pandora-like displays, but in all sorts of lines.  On the other hand, a refreshing handful of vendors who have stepped out in front and will lead the way.  I hope the summer shows are more promising.

Posted by Janos Consultants at 2:47 PM No comments: Links to this post